In order of appearance.

The English dub by Manga UK came out in 1996 on VHS and later on DVD. It has only dubbed audio and several scenes were removed for censorship reasons(mainly the lesbian scene with Rose and Yumi). Also the dub has many (37(or 35 if you don't count the use of h*ll as a place)) profanities to make it more edgy. There were also script changes such as Yumi telling Harlem Bomber where Kenichi/Mari were because he would have killed her if she didn't. The Critical Mass version was uncut and the DVD's were dub/sub. It should be noted that Critical Mass usually released xxx anime such as Nami SOS or Angel Blade.

The theme/only music from this OAV

A long clip from the (comicly bad) dub by Manga Entertainment 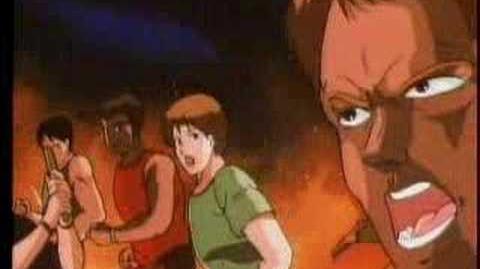 Retrieved from "https://gonagai.fandom.com/wiki/Violence_Jack_Harlem_Bomber?oldid=7041"
Community content is available under CC-BY-SA unless otherwise noted.