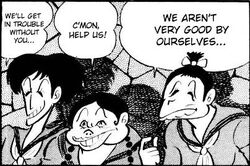 Mikiko Kawamoto, nicknamed Miko (ミーコ Miko) is a high school girl and an avid thief, but wants to turn her life around. Deeply religious, she is also a Devilman who was formed after the demon Tollg merged with her. She is bugged by some of her friends to steal stuff for them, up till the point she gets agitated and involuntarily sprays two of them with acid. Later, she is captured by the Demon Busters and is freed by Devilman. Showing her gratitude towards Akira, she joins the Devilman Corps.

Amon: The Darkside of The Devilman[edit | edit source]

She is a supportive character and helps Dosu-Roku out of trouble caused from Amon.

In rest of the volumes of the ancient past she is replaced by a red-haired version of herself named Atai (アタイ), with a bug helm and pincer arm. Controlled by a demon which may or may not be Tollg , she attacks Sirene. But Kaim pierces her through the stomach bisecting her. Grieving over the loss of their friend, the two halves join and heal her body. The acid-spitting demon leaves her body (leaving the bug parts) and goes off to find a better host.

In volume five, Miko is shown running away from the Demon Busters as her fellow Devilmen get massacred. Refusing help from Dosu-Roku she is escorted by a young man into the Anti-Demon Headquarters. She is not killed however, as she is seen fine in the Armageddon battle in Neo Devilman.

As part of the Devilman Corps she hunts malicious Demons with her sidekick Yumi. During an attack from Seylos on the Devilman Corps Miko and Yumi go to tell Akira, but are attacked by Amon after Akira lost control over the demon. She survives Amon's rampage, but is forced to watch Yumi being devoured by Amon. She is last seen watching Akira fall to the ground, leaving a huge crater of Amon's body in the middle of the street.

As a social outcast she is bullied by her fellow high school students. From being discovered as a Demon she is driven out of her school and home. She befriends the young boy Susumu, saving him from his evil parents. She later kills a bunch of Demon Busters and grows fluttery pink wings. Her powers are more toned down compared to the original version.

In Grimore, she is named Michiko and is a member of a gang of punks, with some other familiar faces, but unlike them she seems quite bored. She turns down a boy that looked an awful lot like Ryo Asuka who offered her sex.

In here she makes a small appearence in the last episode.

Retrieved from "https://gonagai.fandom.com/wiki/Miko?oldid=8346"
Community content is available under CC-BY-SA unless otherwise noted.