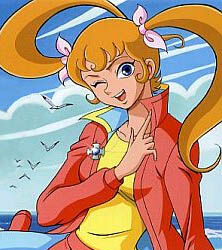 While Cutey Honey is Go Nagai's best-known contribution to the "magical girl" genre, in 1978 he created Majokko Tickle (Magical Girl Tickle), which is more in line with "traditional," "old school" "magical girl" shows such as Mahou Tsukai Sally and Himitsu no Akko-chan (the 1960s originators of the genre). The TV series ran 42 episodes on TV Asahi from March 1978 to January 1979 and was produced by the Toei Company (not Toei Animation however), with animation work by several studios, including Mobile Suit Gundam-creators Nippon Sunrise.

While regarded as one of Nagai's more obscure, minor works, the show did become a moderate success when aired in some European countries, particularly Poland. It is unavailable in English. Series director was Takashi Hisaoka (previously an episode director on Mazinger Z) and some episodes were written by Masaki Tsuji (previously the head writer on Nagai's Devilman, Cutey Honey, and Dororon Enma-kun TV series).

Tiko (Chiiko) Komori, a shy 10-year-old girl (voice: Yoko Asagami aka "Yuki Mori" from Space Battleship Yamato), receives a book as a birthday gift from her dad. When she opens the book, out pops Tickle (Chikkuru) (voice: Nagai veteran Rihoko Yoshida aka "Natsuko Aki" from Cutey Honey, "Maria Grace Fleed" from UFO Robo UFO Robo Grendizer), a mischievous pigtailed fairy in red short-shorts and go-go boots, who was imprisoned inside the book for playing pranks on people. Tickle uses her magic to alter the memory of Tiko's family (a la Majokko Megu-chan - which also featured Rihoko Yoshida in the title role - or the later Sailor Moon) and pass herself off as Tiko's twin sister, and the two are soon inseparable best friends. Tickle still enjoys playing pranks - particularly on Tiko's annoying kid sister, Shiro Kabuto-lookalike Hina - but mellows out as the series progresses. Tiko's character design sort of resembles a younger version of Miki Makimura from Devilman.

While intended for very young audiences in Japan this series still has some content which would be deemed objectionable on Western children's television, including one episode in which the boys in Tiko's class keep trying to grab the girls' breasts (but hey, this is Go Nagai after all).

Retrieved from "https://gonagai.fandom.com/wiki/Majokko_Tickle?oldid=6480"
Community content is available under CC-BY-SA unless otherwise noted.