One of Go Nagai's earlier (and most nude) works. Despite all the nudity, fanservice, lack of outfits, sadomasochism, nazis, S&M Nazis, and implied Yuri, it is not adult. Meant as a parody of X-rated films, Kekko Kamen started out as a manga in the 70s and was made into an anime in 91 by Dynamic Planning. The english version was done in the 00s by ADV films (like Cutey honey / Black Lion ) and was generally well recieved as a good dub (i.e., not changed or edited for a different audience like Mazinger Z /Tranzor Z). Many see the film as cheesy and pointlessly fanservicey yet others see it as a tasteless good time.

The manga was influenced by Gekko Kamen (moonlight mask) and adult (X-rated) films, e.g., the songs at the end of the OAV and the masked character never giving away their true identity (like cutey honey does in every episode).

A curvy girl who wears gloves, mask, scarf, boots and nothing else!!?!?! She saves Mayumi Takahashi in every episode whenever she gets targeted by the staff and has a cameo in Violence Jack manga.

A somewhat curvy girl who has white underwear (we see it often) and is contantly punished by the staff for various reasons. Kekko Kamen protects her but it's because of Kekko Kamen that alot of the stuff happens to her (since the staff wants to defeat Kekko Kamen and they figure out that Kekko Kamen comes whenever Mayumi is in trouble).

The headmaster of the Spartan institute and a liker of nude women. In most go nagai manga, the staff of a school lusts for the students and he is no exception. His goal is to defeat Kekko Kamen and he goes to great lenghts to accomplish this. His stance of education is that punishment makes kids teens want to learn better and he often uses rather PG-13 or R-rated methods of punishment, often involving female nudity. He claims to be a demon and wears a dark coloured dress/cloak/moomoo-like outfit and a mask that changes to show his facial expressions at times.

A lusty guy dressed like a dr who is really into chicks and helps the headmaster try to uncover the nude hero. I wouldn't be surprised if he j-rks off like 8x a day with his lusts!

A bi beefing gaylord who has a super buff body. He's totally not based on the governor who was in predator, as he's Arnold, not Jesse, The Body Ventura. He's got some kinda power of being really good looking and Kekko Kamen and The Principal are kinda turned on by it despite them not being into dudes.

A samurai dude who takes photoes of chicks after he slices their clothes off. He also has an umbrella and can block Kekko Kamen's crotch attack with it.

The trailer for the OVA (it's comically fun) 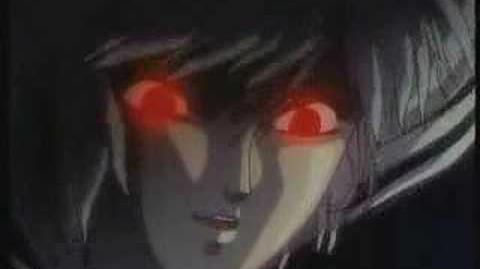 Retrieved from "https://gonagai.fandom.com/wiki/Kekko_Kamen?oldid=8208"
Community content is available under CC-BY-SA unless otherwise noted.