Hanappe Bazooka is a manga and anime by Go Nagai which was written by the homie who did mad bull 34 and crying freeman. sounds like a recipe for good cr-p

This candya55 teen Hanappe Yamada summons Demons to his place and they f his life in silly sexy ways. This goes on for 10 volumes of secks and violence.

It starts with what I can assume is God talking to this hazy crotch in some wasteland about the destiny of some super guy. Then we get Hanappe and his homies(who are never seen again) guying photos of the chick he like taken w/o her consent and showing her undies. After Hanappe buys one for 20$ he's outta cash and while stalking the chick he is attacked by bullys. they beat on him and cut off his pants and he whizzed himself, and the chick he liked is watching!!. He escapes into a video store and finds a p0rn0 vid, which he shoplifts(just for one night!). At home his dad lost a bundle in the stock market and his hot sister teases him. so he grabs her t-t. later he's j-rkin off to the p0rn0 of a girl doing things alone and imagining it being the chick he likes. but 2 demons show up. its revealed that every 1000 years on Friday the 13th if you wiggle ur wiener in a special way, it summons those demons. yeah that makes sense. so he wishes to be strong. but then his mom coms in hearing noise(and not the summoning that trashed his room) the demons turn into a school girl and her dog. mom isn't bothered by there being a school girl in Hanappe's room while he's wearing only a shirt and the dog gets a b0ner for the moms milf bod. when the mom tickles the dogs b0ner thinking its a bellybutton, he cant take it and starts b0ning her. dad and hot sister come in but the other demon creates money for dad and starts lesbianing the sister. Then Hanappe wakes up. the next day, after school the bullies attack but Hanappe kills em. but it turns out to be an illusion and they wenrnt dead or w/e. the demons reveal Hanappe is gonna be the ruler of the world and needs a heart of ice (sailor moon movie 2) to rule and use his powers. they give him a finger power that lets him enlusten chicks(in the manga it turns his finger into a wiener). so the next day he starts trying to b0ne hot chicks. but gets f'd by fat chicks. and a crossdresser. when he returns home he finds the house is a demon place. dad's b0ning a harem of 5kanks he payed to be with him, mom is being b0ned by bazooka, and his sister is doing SM with dance. so he tried to stop it. but the fam likes their demon life. later Hanappe is bummed (and not by as cross dresser this time) and the chick he likes comforts him. the demons want him to use his powers on her to b0ne but he has high views on her and thinks shes a good person.so the demons show him she's been b0ning the teacher for good grades(wait, how did they know she was doing that??). Hanappe calls her to this dark alley at night to confront her but she denies it. so he zaps her and she goes super lusty and trys to b0ne him. then trys to kill him. so the demons slag her. they say they'll bring her back to life or something. Hanappe researches ways to fight demons at the library (witch wuld be the internet today) and faces them but it turns out they don't care about most of em. except holy pliers. so the demons take his family hostage and he surrenders. but it was a trick and the fam loves being b0ned by demons. so Hanappe kills himself his family starts eating him and turns into grotesque abominations. wait, that's Violence Jack Evil Town. so he's at the spirit of the world tree (ygdrasil??) ho wants to reincarnate him. but the demons come in and try to save him. after a fight with weird a55 monsters, Hanappe is almost absorbed into the womb of new souls or w/e and the demon babe saves him. they bring his soul back and are gonna revive him. oh and the tree girl sez Hanappe has a great love power that powers up from love. what kinda cr-ppy sailor moon sh-t is that?!

the teacher from Cutey Honey 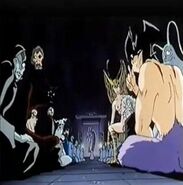 the space boat from star trek

Mazinger Z
Add a photo to this gallery
Retrieved from "https://gonagai.fandom.com/wiki/Hanappe_Bazooka?oldid=6702"
Community content is available under CC-BY-SA unless otherwise noted.