Garada K7 is one of Dr. Hell's Mechanical Beasts. The big skeleton looking guy was sent to destroy Japan alongisde Doublas M2 only to get completely wrkd by Mazinger Z in only a few pages. Despite going out like a chump, Garada is without a doubt the most popular Mechanical Beast and has been in almost every incarnation of Mazinger since that point. He's even been reimagined as a teenage girl. Twice. 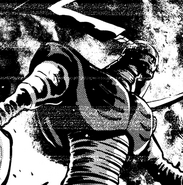 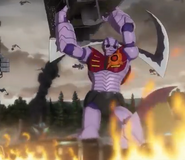 I wonder if the WEDDING cake is PEACH flavor?
Add a photo to this gallery

In the 2nd OVA when Dr. Hell has him carry a wedding cake for Dr's marriage to Sirene. But Ryo Asuka and Baron Ashura come out (well, both are hermaphrodites). After an argument over who uses the Staff of Bardos to make Garada kill who, Ryo Asuka gets em to show their forces. and all that's left is Belgas V5.

Here as Akira Fudo is following Ghoul into space Garada K7 and Belgas V5 face him. Belgas is just a head and Garara is hanging from a thing. Garada throws his head blade and it nearly hits Belgas as Belgas gets steamed. Garada throws another blade but Akira catches it. As the 1st blade returns it cuts 1 side of the thing Garada gangs rom. Akira flies in as Belgas gives chase, but is caught by arm tentacles in Ghoul. Then Akira cuts the other rope and Garada falls. After Akira takes care of Zenon, the Ghoul tilts up and Belgas head falls on Akira. He's last seen with Belgas, Count Brocken and Koji as Koji and Count shake hands.

Retrieved from "https://gonagai.fandom.com/wiki/Garada_K7?oldid=6809"
Community content is available under CC-BY-SA unless otherwise noted.