Devilman (デビルマン, 悪魔人間, Debiruman) is a 1972 manga series by Go Nagai, who considers this to be his

masterwork. It is widely considered to be one of the most influential mangas of all time.

In 1972 after Demon Lord Dante's success, Toei Animation desired to make an anime with similar themes but with a more human-hero. Go Nagai came up with an "evil vs evil" concept that he later made a manga of, with more violence and nudity. Devilman was published in manga form one month before the TV series began airing. It became a classic in Japan. The manga is mature, and with a deeper story since the age group of the readers was higher than the TV series. A few chapters of the Devilman manga reached American shores due to a licensing deal through Glenn Danzig (The Misfits ) who owned Verotik comics. A remake was created in 2004 as a live-action movie, but failed worldwide.

In this media, young male Akira Fudo and his father Reijiro Fudo are killed on a scientific expedition of the Himilayas and the demon Devilman takes over his body. It is important to note that in this version, Akira is dead and the main character of this series is some demon who took full-possession of his body. Using Akira's form as a disguise, Devilman is sent to cause trouble on earth in order to pave the way for the demonic invasion. However, Devilman falls in love with Miki Makimura and her tough, no nonsense ways, and is distracted from his demon duties. The other demons attempt to kill Miki but Devilman kills them to protect her.

The series ends after 39 episodes (July 1972 - April 1973 on NET, which is now TV Asahi) and ends with Devilman revealing to Miki Makimura his true identity, which she believes is just a trick by a demon so she doesn't fall for it, along with beating a tough demon named God and with the same powers of Devilman. This Akira attacks are named after himself ("Debiru-kick, Debiru-Beam, Debiru-Cutter"). He is prone to settling trivial matters with violence in this media and Miki attempts to stop him when he gets out of control. The series also has more comedy (like nudity or urination of little boys or Lala). Nagai enlisted noted scenario writer and sci-fi novelist Masaki Tsuji as the chief writer for this series; Tsuji and Nagai worked together again on the TV series Cutey Honey, Dororon Enma-kun, and Majokko Tickle. Although aimed at a young audience in Japan, the Devilman TV series is still too violent by Western standards and has been aired on TV in only one country outside Japan (Italy, in the early 80's).

In this media, Akira's parents Reijiro Fudo and Sumiko Fudo are killed on a trip to the arctic and he lives with Miki Makimura's family. A friend of Akira, Ryo Asuka, tells Akira that he needs to come with him and tells him about the existence of demons. After being persuaded by Ryo, Akira decides that he must be possessed to save the world. After a ritual/party with music, booze, and semi-nude women, Akira (possessed by Amon whom is one of the strongest demons) kills the demons (whom many were disguised as party-goers). Later, Akira fights Gelmer, Jinmen and Sirene (who was Amon`s lover) and the combined form of Sirene/Kaim. Later on it is revealed that Ryo was the great demon god Satan. It is also revealed that Ryo has flushed feelings for Akira. Later, when the demons are attacking mankind, Ryo tells Akira to stay out of the war and goes on TV to expose Akira as a demon (with the home video of the nightclub scene). Miki and her little brother gets killed by a mob, who believed them to be demons because Akira accompanied them. Akira arrives too late to save them and kills the mob in a bloody massacre. Akira then gathers together an army of Devilmen and fights a 20 year war against Satan. The war later ends with Akira being severed at the torso. Satan regrets his actions and for having killed the one he loves afterwards, as he is seen crying over Akira.

The OAV's only went for the first 2 volumes (released in Japan in November 1987 (Devilman:The Birth)and in February 1990(Devilman:Demon Bird Sirene)) and changed a few things in terms of order of events and characters. Kazuo Komatsubara, an animation director from the '70s TV series, returned as character designer, and the OVAs were animated by his studio, Oh Production. The dub done by Manga entertainment was comical and was filled with unneeded profanities that weren't included in the original. Unfortunately, the DVD release included ONLY the dub, and the subtitled Japanese audio is available only on out-of-print VHS. See video for examples. 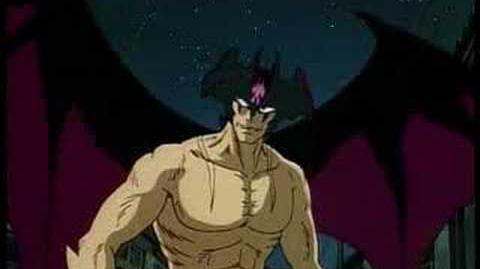 the 70s and despite it's big-budget it is seen as poorly made and won the Japanese version of the Razzies. The subbed version from Hong Kong is not translated well and is humorous because of its bad English. Unlike the anime versions, the movie covers the last battle between Akira/Ryo and shows a possible opening for a sequel (Violence Jack). The CGI is great, but nothing else about the movie is.

Going in a different direction then from the manga or OVAs, the movie has Akira Fudo and Ryo Asuka as classmates, childhood friends, and rivals. Leading normal school lives, Akira gets beat up by the local bullies, Miki Makimura defends her classmates against bullies, the local pervert records and spies on Miki, and Ryo shears off students fingers with clippers.

Ryō invites Akira to his father's research center where they have discovered demons living deep in the earth. Unlike the manga and anime versions, the demons are encased in giant sperm cells that infect human bodies. Amon takes over Akira and becomes Devilman. A Demon with squirming livers and bug wings gets killed by Devilman. Asuka is shown early on also to be a "beautiful" Devil and grabs Akira by the arm and declares, "Happy birthday, Devilman." in heavily accented English.

Announcing the world news Bob Sapp talks about useless information during the entire film, and is later turned into a three-headed Demon. (possible Zenon?)

Akira wonders about his humanity when he is interrupted by Sirene. Fighting explodes between the two when she finds out that Amon is absent in Akira's memories. Akira is beaten, but is saved by Ryō.

Miko the plain Jane of the movie is teased by her classmates. Her only friend being Miki. Miko becomes a Demon and is run out of her school and has her house vandalized. Miko alone in the world befriends a young boy named Susumu. Killed by his mother turned demon in the original, in the movie we have Miko killing both parents and saving the boy.

Along the way, Akira befriends an original character whose fingers were sliced off by a homicidal Ryō. He reattaches his fingers and spends the rest of his life drawing Ryō and having constant dreams about him. Jinmen eats him and Devilman kills Jinmen without much dialogue between the two. Akira learns of the existence of Satan from the dying Jinmen.

As the world panics at the rise in Demon activity, a special task force called Demon Busters is formed and begins torturing citizens in their search for Demons.

Ryō takes Akira to a DB shootout with a mansion holding Demons and possible occult followers. Everyone in the house walks out in the front yard one by one like lemmings and are gunned down. Ryō gives an Uzi to Akira and tells him to help him defend the Demons. Akira refuses and finds out Ryō is King of the Demons, Satan. Ryō jumps acrobatically while all the Demon Busters are quickly terminated since they're too stunned from the prancing Ryō.

Miki takes Akira to the church to talk about getting married and making babies. Go Nagai makes a cameo appearance here (similar to that of what another famous comic-writer, Stan Lee, does in the Marvel movies.) Panic and mayhem enthralls the world while anyone and everyone is suspected of being a Demon. many innocent people are killed.

Miko and Susumu show up at the Makimura residence and are given food and shelter. Local perverted boy calls the DB on them and Miko and Susumu run off. Akira sacrifices himself as the Demon for the good of his family and Miki, and is shot a million times by the DB. Due to the panic of having a Demon being fostered in the Makimura household the neighborhood gets together and has a good old fashioned lynching. Akira revives and goes home to find Miki beheaded. Distraught he carries her head off to the local church where he encounters Ryō.

Angry at Ryo for leading his life into Hell he squares off against Ryo and they transform into their respective alter egos. Satan and Devilman have one final battle that turns the entire world into a blazing inferno as the souls of the damned rise up in fleshy pillars of nudity. After Satan kicks out Devilman's guts he, falls to a small rock isle floating in the middle of the ocean. Ryō sits next to him and walks down memory lane with Akira, much like in the manga.

miko
Add a photo to this gallery

Rerasu
Add a photo to this gallery

Devilman had a big impact in Japan with many directors being inspired to use stuff rom it. Using sexiness and violence in kids manga has since become the norm with gore and babes in pretty much everything now.

Retrieved from "https://gonagai.fandom.com/wiki/Devilman?oldid=7596"
Community content is available under CC-BY-SA unless otherwise noted.