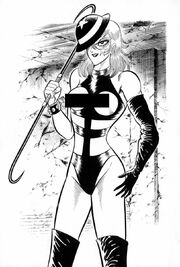 Blue is both second in command and love interest of Mad Saulus and appears in the Violence Jack manga and Violence Jack Evil Town OAV. She wears a kinky S/M leather outfit in the manga and lingerie in the anime. She is revealed to be rather intelligent as she makes strategic decisions that often turn out in her sides favor such as having an free trade market after Jack is found or knowing that if she with others then Mad Saulus won't be mad since he loves her. She is bisexual and promiscuous, for example: Blue will save a man's life just so she can fornicate with him later, and even shows lust towards Jack at the trade market. She is lovers with Mad Saulus as she does not mind his disfigured and intimidating appearance. She has an open relationship with him as they both never object to either of them openly mentioning sex with other people. She resembles Gestapoko (the S/M Nazi) from Kekko Kamen episode 1 and it is revealed that she is a hermaphrodite in the manga (which leads to a very unpleasent experience for the leader of section C) (In the anime she stabs Kawamori before her lover rapes Aila Mu.). After (or during) this abuse, Violence Jack comes in and with one swing of his 40cm Jack knife, he decapitates her (which is also shown in the OVA) along with her left mammary and large prostate. Mad Saulus returns from his battle with Jack to find his men butchered and Blue dismembered(no pun intended). Mad Saulus swears to slaughter Jack as he is mad with grief and then he cannibalizes Blue to merge their strength (Mad Saulus transforms into a monster in the OVA).

She was voiced by Kenyuu Horiuchi (a man using an ambiguous voice) who was also Kyouka Ohizumi/Yakumo Ohizumi in All Purpose Cultural Cat Girl Nuku Nuku, Chief Editor Sasaki in Bakuman, Hikage in Blood Reign: Curse of the Yoma, Legolas in Blue Dragon, Kuni Hirokawa (ep 4) in Devil Lady, Noratty in Dinosaur King(a kids show dubbed by 4kids), Zoruba in God Mazinger, a buncha dudes in Genesis Climber Mospeada(which became Robotech season 3), Mako's Dad in Kill La Kill, General Durahan in Monster Rancher (another kids show), John in My Sexual Harassment (a gay p0rn0e), Sanson in Nadia - The Secret of Blue Water, Pain/2nd Hokage in Naruto(both gay and a kids show), Kinemon in One Piece(a kids show dubbed by 4kids) Keisuke Iwazaki/Rapeman in The Rapeman Anime Version (a f'd up p0rn0e), Mikihisa Asakura in Shaman King(a kids show done by 4kids), Yoriichi Ozaki in Urotsukidoji: Legend of the Overfiend (a f--kin tentacle p0renoh!!) Tetsuya in Violence Jack Hell's Wind‏‎ (not p0rn0h but still f'd up) and Petora in Wedding Peach(a girly magical girl show about a pink haired girl and her girly girl friends who fight for girly love)

In the dub he's voiced by Alan Marriott under the name Jeff Reeves as its basically p0rn0. He also did the voice of Daizaburo Eddie Ban in Maf Bull 34, Akira Fudo in the Devilman:Demon Bird Sirene and Devilman:The Birth, Karon in Appleseed, Traffic Officer Motohashi / JGSDF / News Anchor in Patalabor, Scoop / Spud / Mr. Bentley in the US ver of Bob the Builder (G and X rated shows? What is he? The Yugioh Actors??), Victor Volt in The Secret Show, Glar in Planet 51, Sven in Voltron Force, Simon Rhodes in Hot Wheels: Battle Force 5 (If only it was Alexis Rhodes from Yuigioh GX!), Mayor Kosmoceratops / Henry Hermit Crab / Herbie Hermit Crab in Dnosaur Train, Natan / Arsalan / Job in 2010s Superbook (Bibleshows and Go Nagai??), Buried Lede / Mr. Stripes in My Little Pony Friendship Is Magic(Gotta j-rk off to horses!!), Chef Rambley / Mr. Cheddarton in Nexo Knights, Stan in the Norm of the North movies (aw f--k no!! go back to being a hermaphrodite in violence jack!) and Darreth / Dareth / Captain Soto in Lego Ninjago.

There has been some debate on the true gender of Blue. Some say she was born male and became a woman while others say the opposite (though the latter is highly unlikely). Using the manga pages we can see she has a bit of what might be female genitals underneath her rather large male organ. Also when Jack sliced off her left D cup there was blood and no sign of silicone or other breast implants. Furthermore in the anime her big breasts jiggled as though made of real (and soft) breast meat when she jumped when Jack was about to behead her so her big soft bouncy bust is real. Though it is possible for transsexuals to develop breasts to that naturally size through early use of hormone therapy. This evidence leads us to feel like she is an hermaphrodite/intersex who was born with the ability to develop breasts and possessing both male and female crotch parts instead of being born one and changed to the other. Blue is likely just an hermaphrodite with both male and female primary sex organs(penis, vagina), but only female secondary sex organs(breasts)

Blue being devoured by Mad Saulus seems very similar to the prophecy in the book of Revelations where a demonness known as the Whore of Babylon will be devoured by a demon known as the seven headed beast.

Retrieved from "https://gonagai.fandom.com/wiki/Blue?oldid=7597"
Community content is available under CC-BY-SA unless otherwise noted.